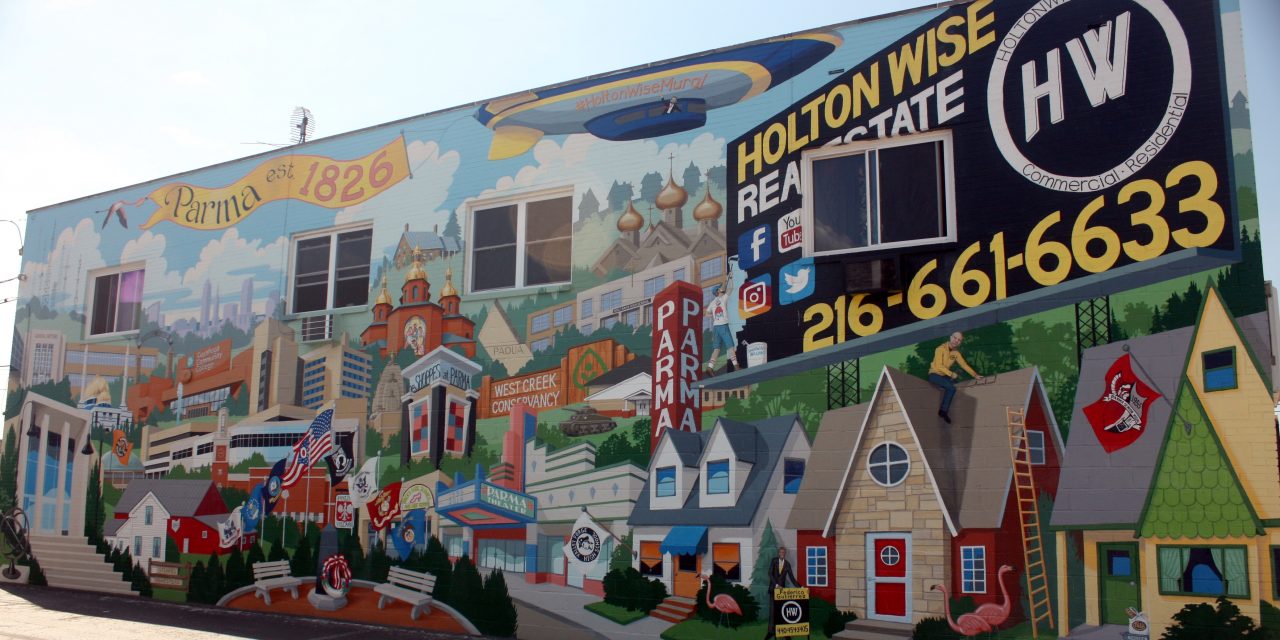 Though you may not realize it, Parma actually has a number of murals showcasing the city’s iconic places and cultural heritage. Take the tour using the map below. 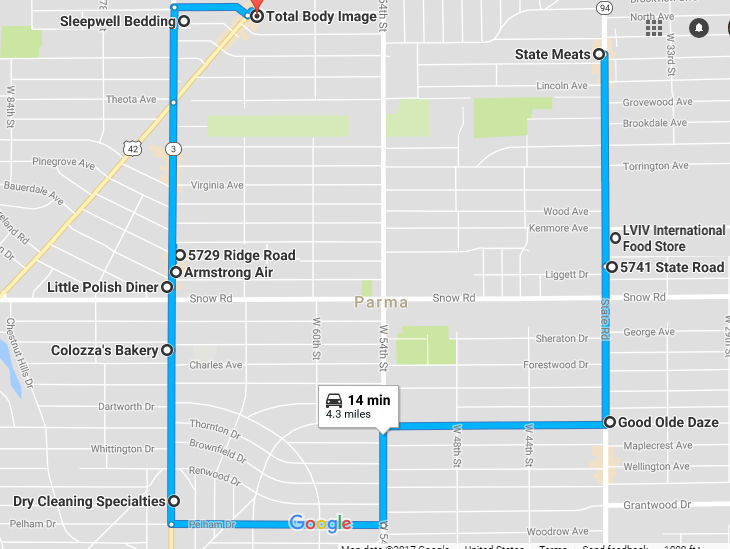 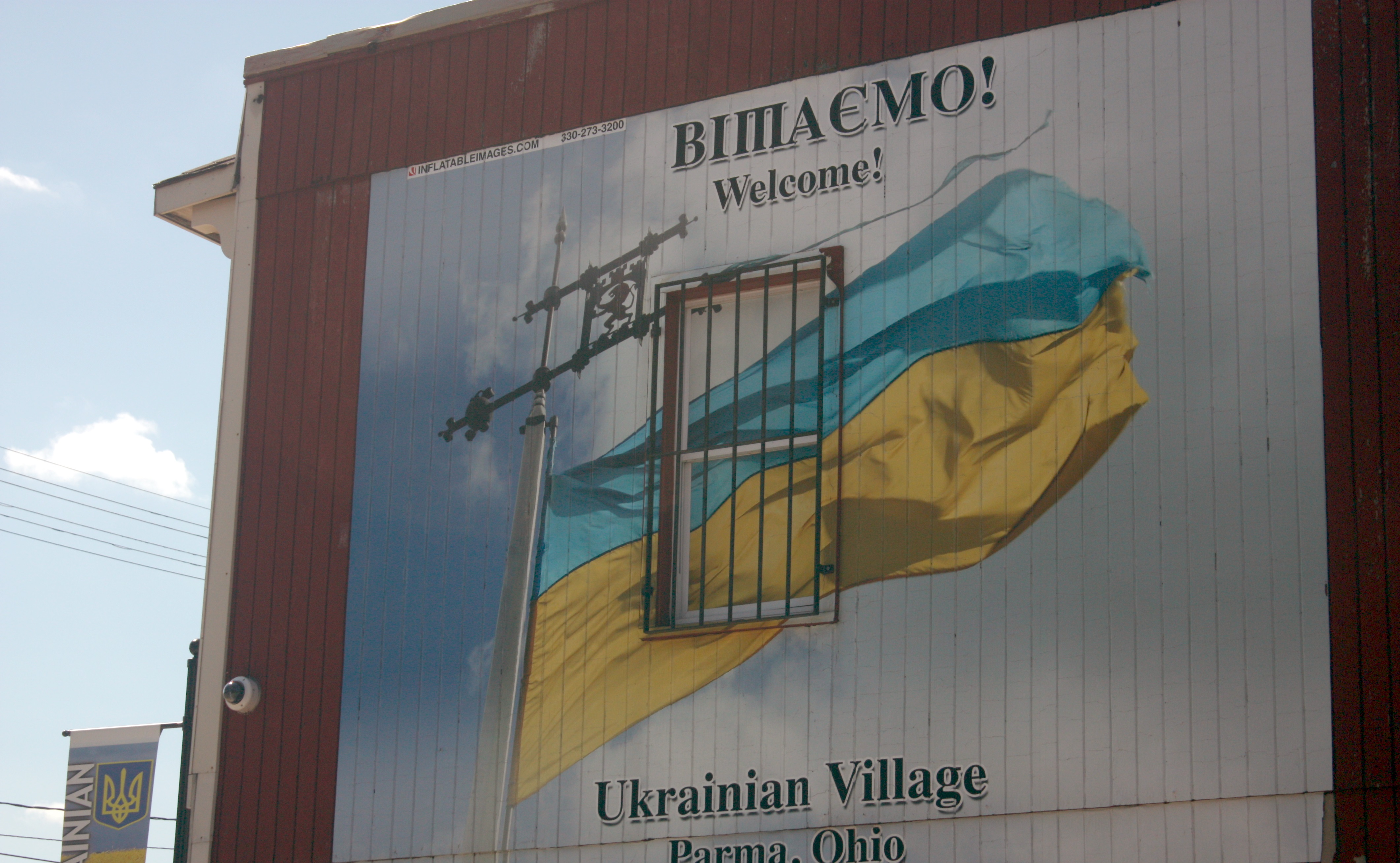 State Meats has served up Ukrainian sausages and other specialties for more than forty years.  So it seems the perfect place to display a mural welcoming all to Ukrainian Village. 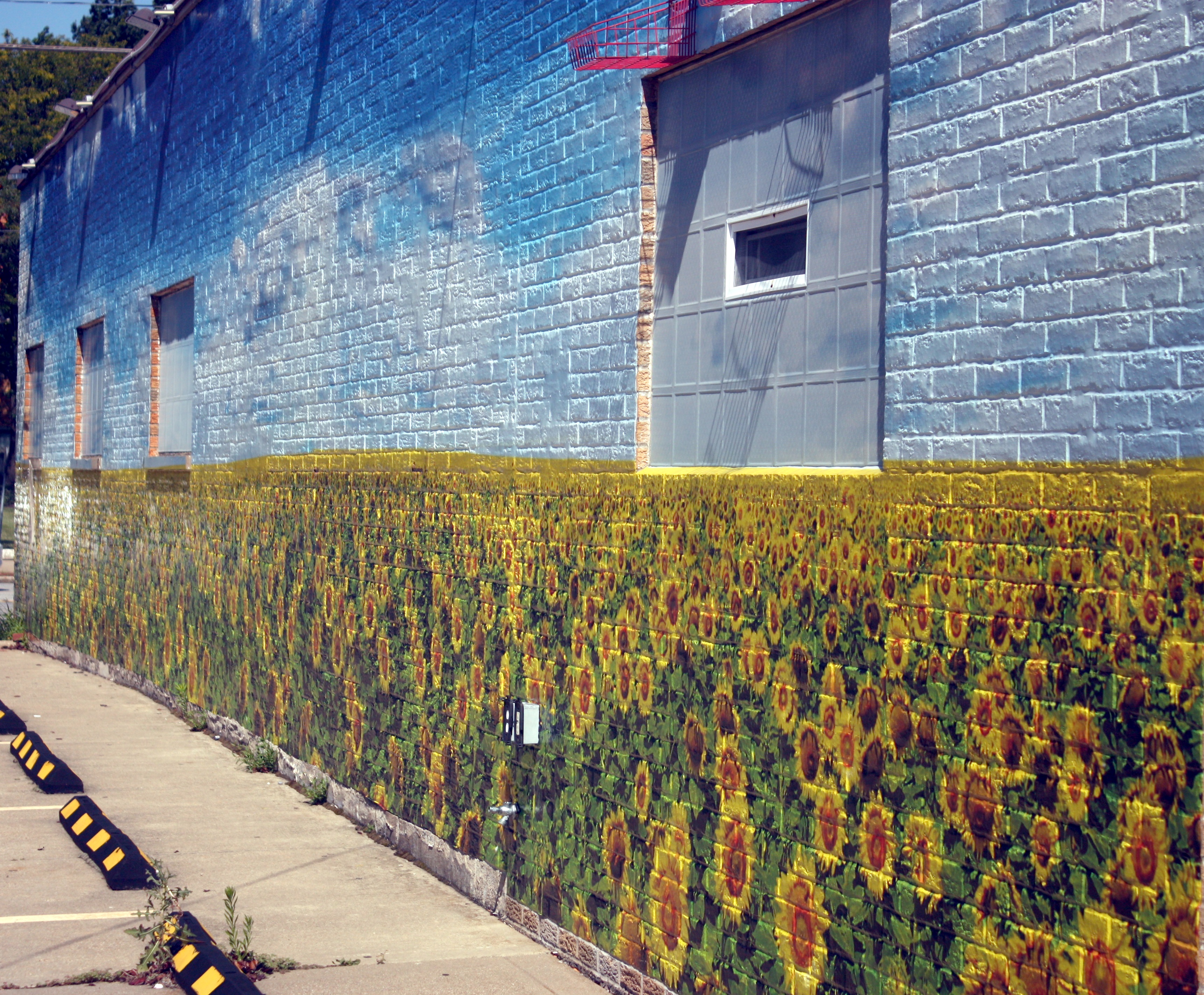 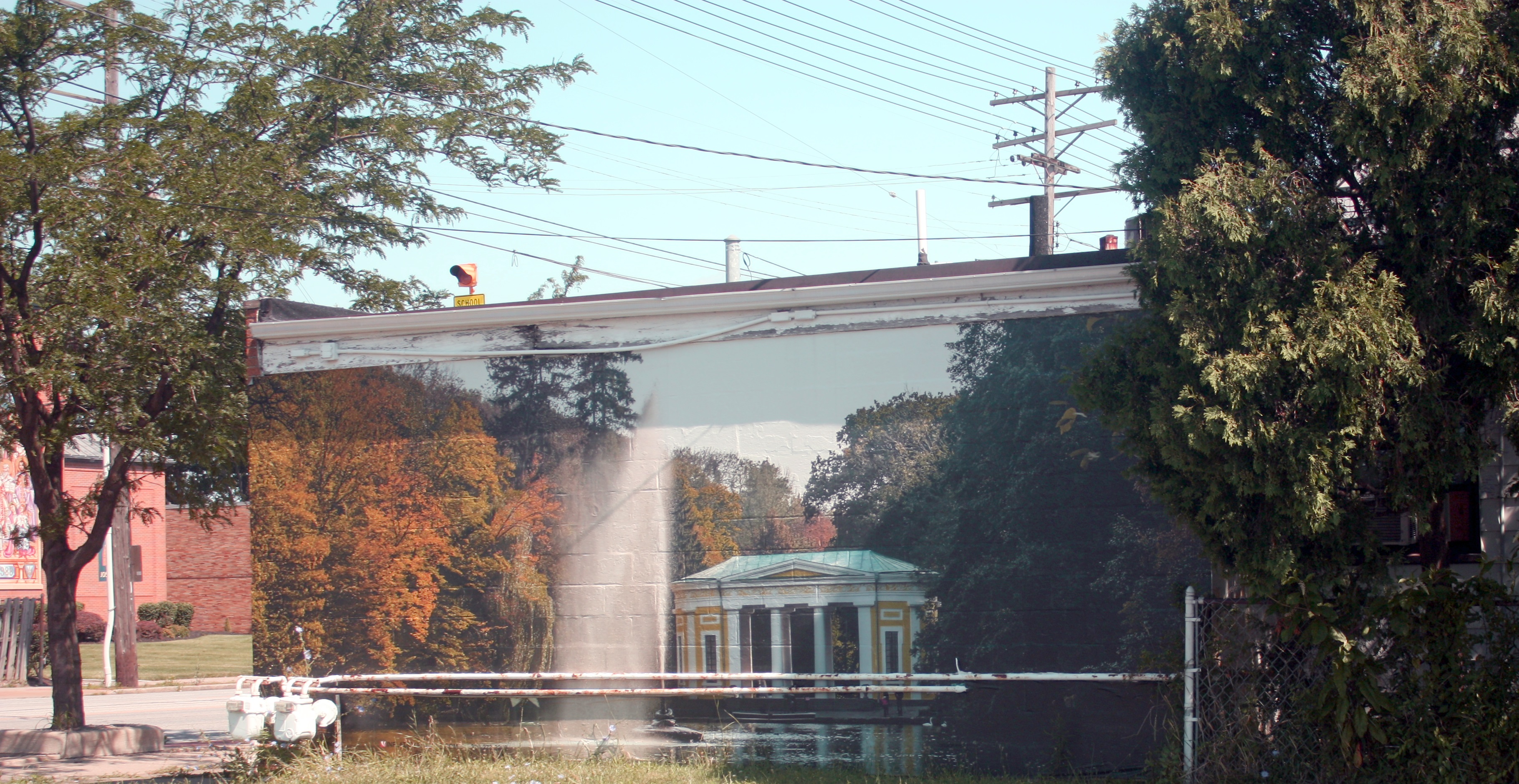 The site of the old Parma Lock Service displays another view of Ukraine from Inflatable Images. These vinyl works were paid for with government-issued grants for city improvements.

Good Olde Daze has served Parma food and drinks for more than 25 years. Its scene of  the Ukranian city of Lviv is the final piece of the government-funded art on State Road. Former Mayor Dean DePiero said aesthetic improvements such as these capitalize on Parma’s strong ethnic heritage and make the city more attractive to people and businesses. 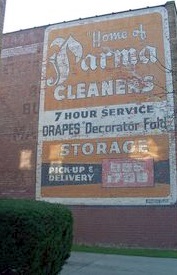 See the remnants of one of Parma’s past businesses in this mural on the side of Dry Cleaning Specialties. 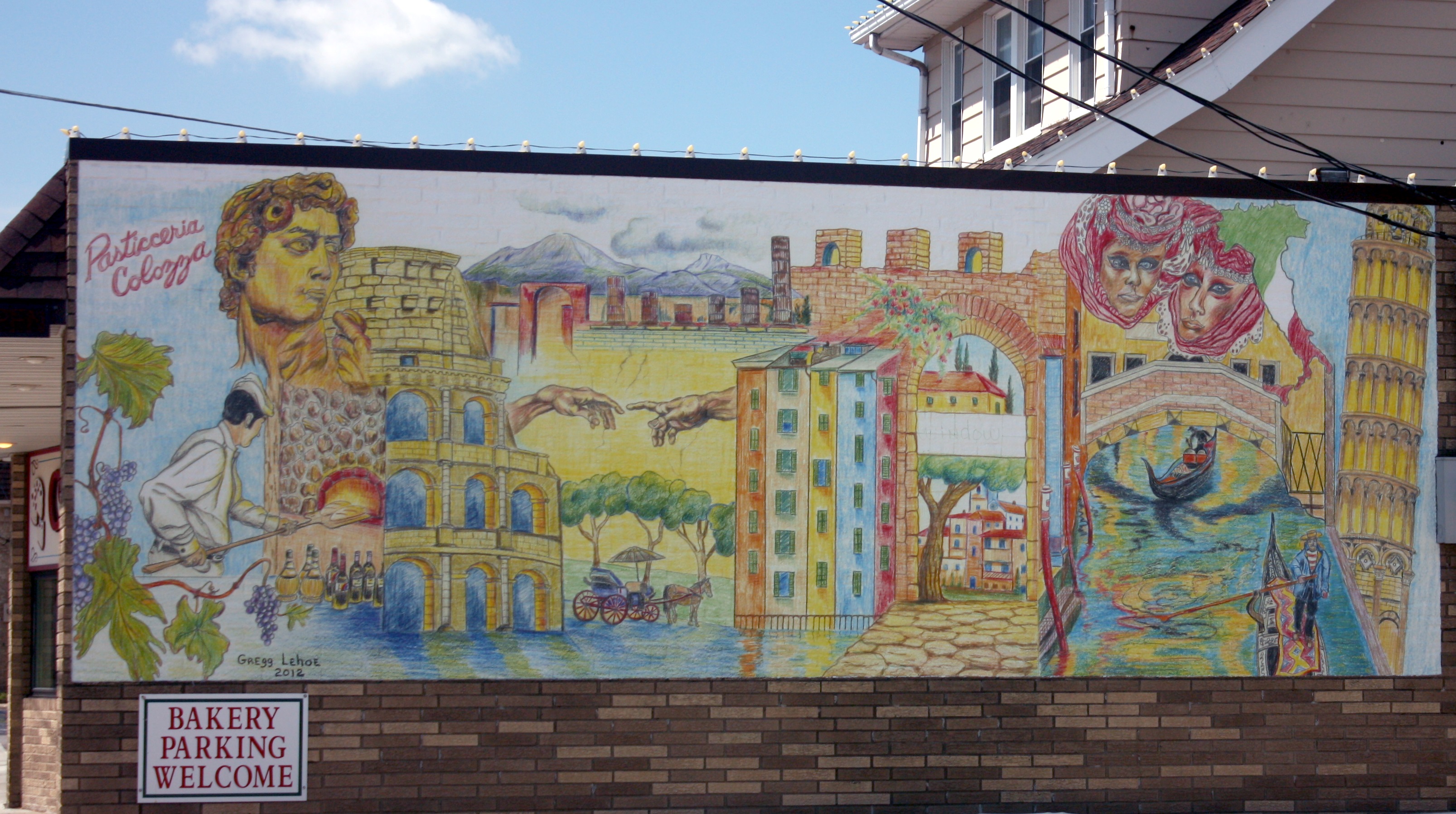 Get a taste of Colozza’s Italian roots (in addition to its delicious cakes) with the scene on the side of its bakery. 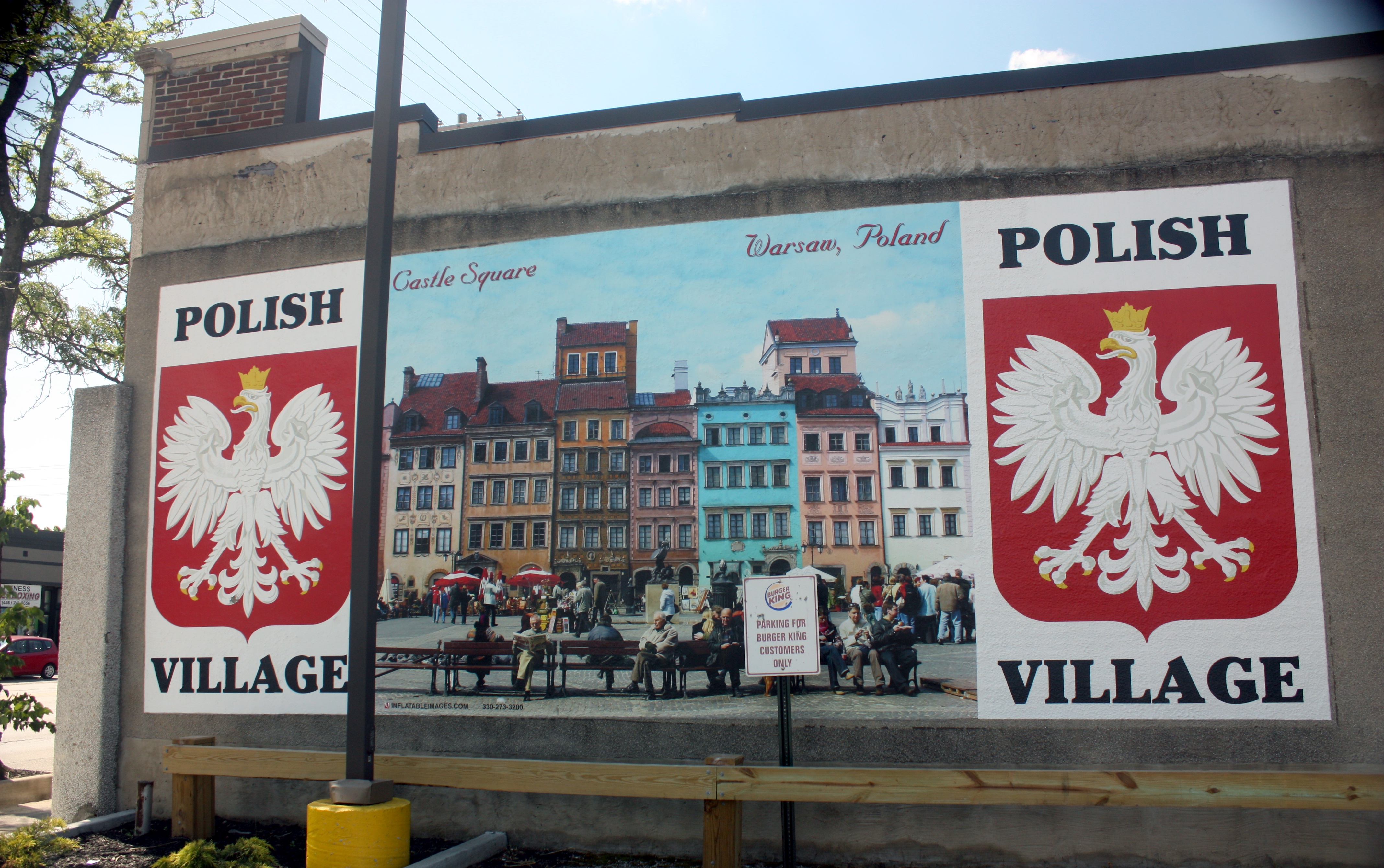 Enjoy the cityscape of Warsaw, Poland while you’re still in Parma on the side of Little Polish Diner. Stop in for some great ethnic food while you’re in the area. 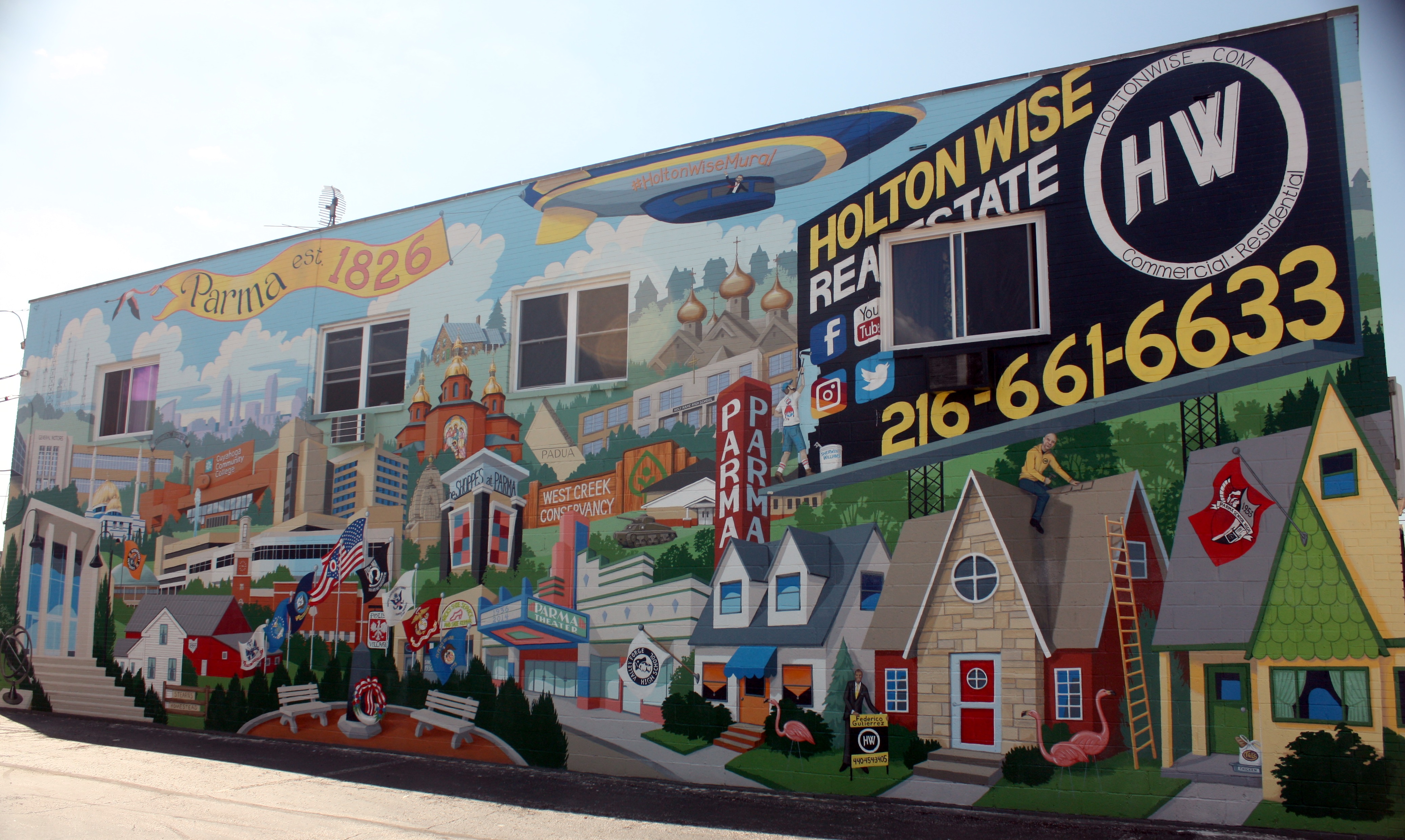 See everything that is Parma in one fantastic mural on the side of Armstrong Air, next to Tal’s. Local realtor Holton-Wise hired artist Kim Colarik to paint the mural. She incorporated ideas that Parma residents shared on Facebook into design. 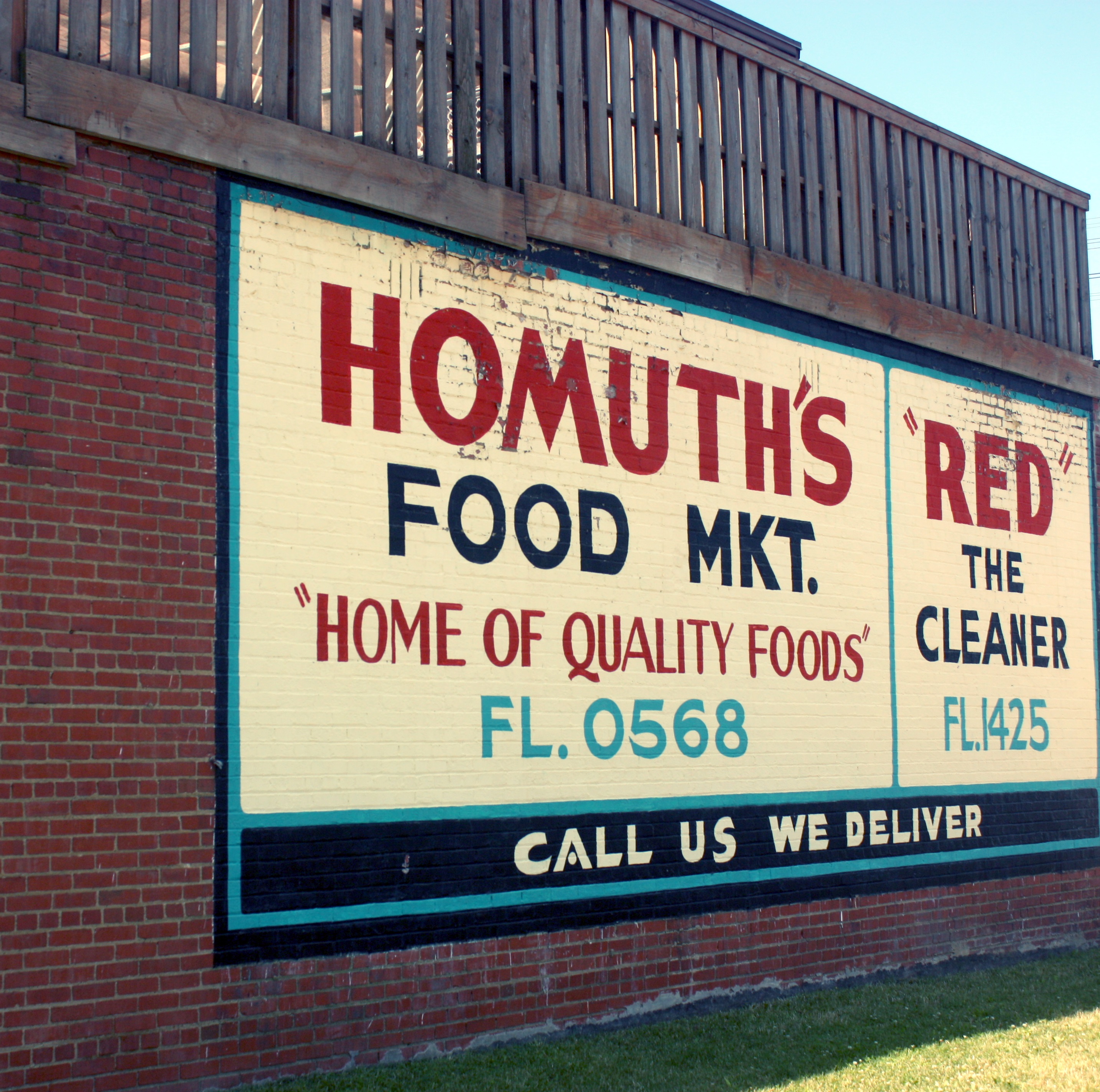 The 2010 demolition of the Parma Recreation bowling Alley (built in the 1940s) exposed this classic mural for the first time in nearly 70 years. It advertises Homuth’s Food and Red the Cleaner with six-character phone numbers, a fun representation of Parma’s past. 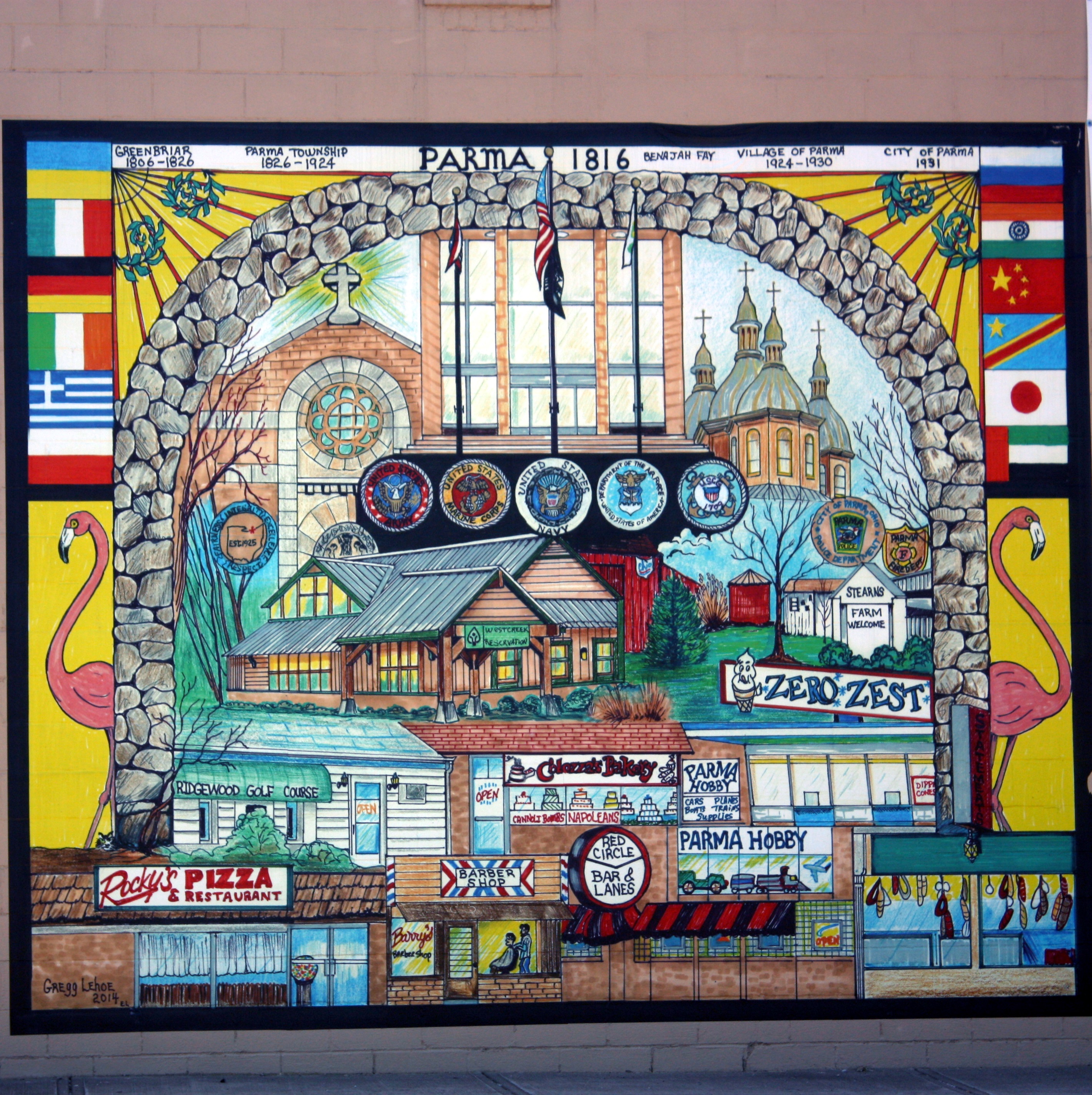 The old Parma Hobby stays alive, featured along with other Parma icons in this mural. Track Parma’s progression from township to city with the dates at the top. 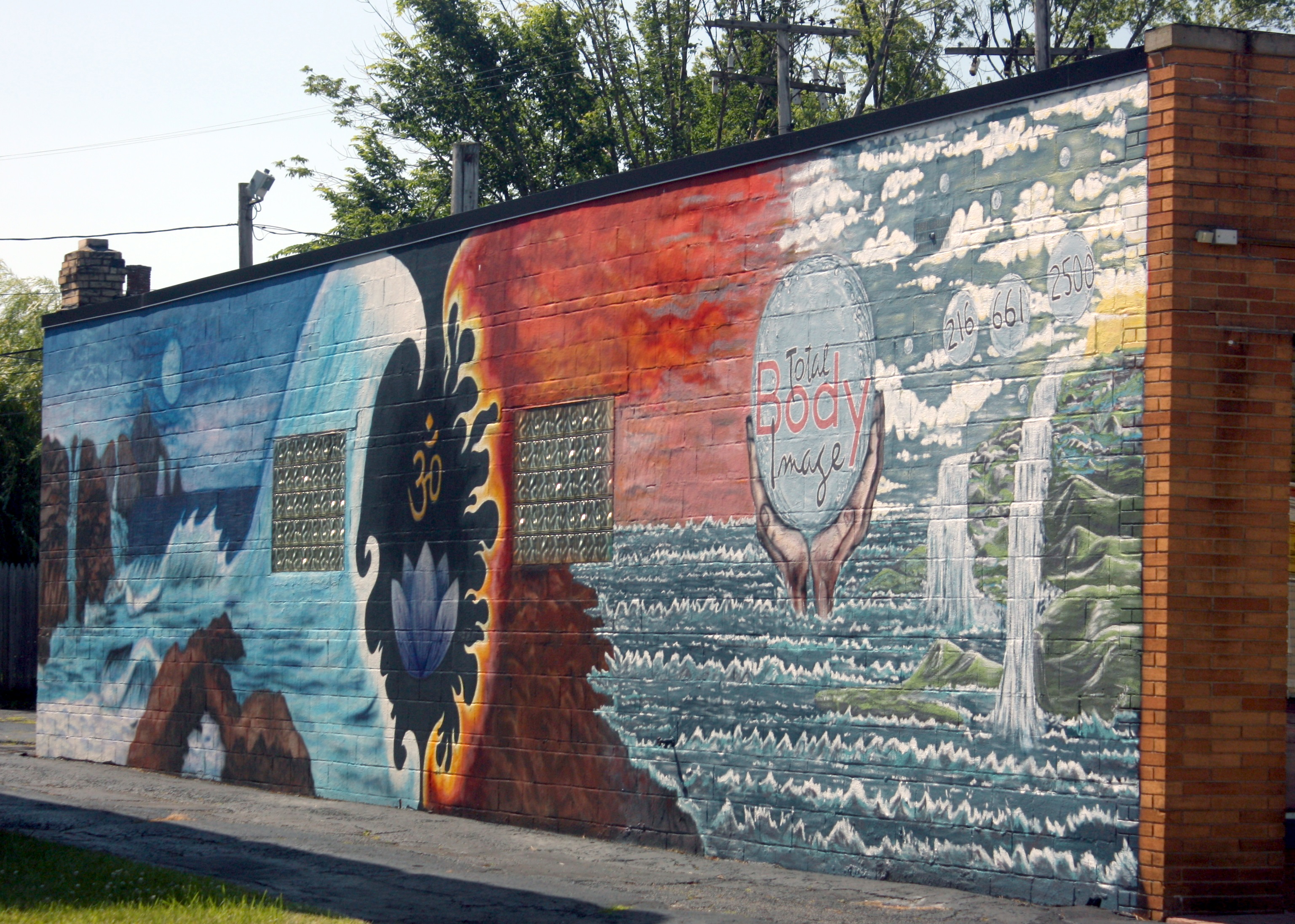 You’ll find all four of the earth’s elements beautifully represented in this mural on the last stop of your tour.

Final Score has a great mural on the side of its building on State Road. 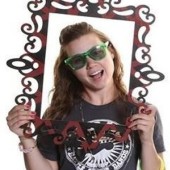 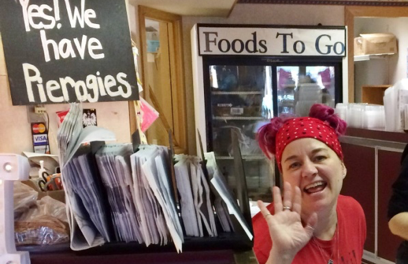 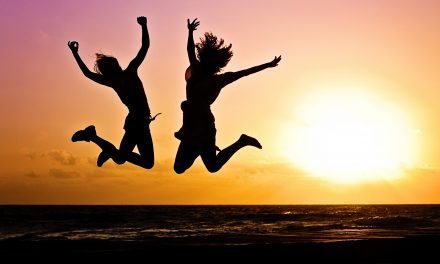 11 reasons why it’s great to be a Parma YP 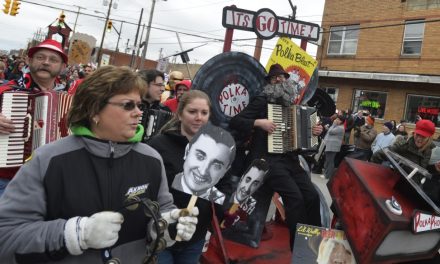 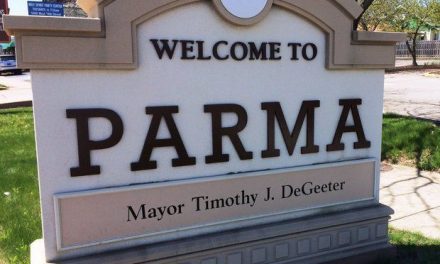