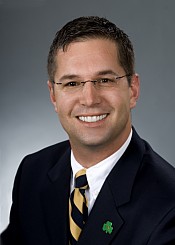 Parma Mayor Tim DeGeeter has held the office of Mayor since 2012. With his passion for the city, some may be surprised to learn that he actually grew up in Indiana. As a self-proclaimed “super fan” of Fighting Irish football, DeGeeter planned to attend college at the University of Notre Dame. But rejection letters lead him to Ohio to attend John Carroll University and stay in Cleveland for law school. That’s where he met his wife, now a federal law clerk in Akron. DeGeeter began his political career as a Parma City Councilman and served as a State Representative in Columbus before bouncing back to Parma to serve as Mayor.

Young Professional of Parma, Kathie Zipp, had the opportunity to learn a little more about our city’s Mayor in a recent interview. Here are some things she found interesting about his background, passions and positions, and thinks you may too.

How did you become interested in politics?
DeGeeter: I was adopted as a baby. My mom was a nurse and my dad repaired elevators—but he read the paper every day. I was always into current events, government classes and history, and gravitated that way in college as a political science major. I never thought I’d be mayor of the seventh largest city in Ohio. I was intrigued by public service and elected office. I was fortunate to serve at both the local and state levels. Serving at the Statehouse gave me a great perspective—getting to know our state so much better and having friends and relationships throughout it. Having my legal background and serving other roles as Assistant Law Director and Assistant City Prosecutor are life experiences that are very helpful in my current role as well.

How do you see the relationship between the mayor’s office and the City Council?
DeGeeter: We look at City Council as our partners. We try to be very effective communicators because they’re the ones who have to pass the legislation and are the checks and balances on how we govern, communicate and administrate. Parma has nine wards and a Council President. We have a very good council. Other cities sometimes have tension between the Council and Mayor’s office, and that’s not good for the residents. Everyone’s first desire and goal is to serve the public and move the city forward. How I look at it is I try to make the city better each day than the day I found it. So whenever I leave my position as Mayor, I can look back and know I made my city, my community, much better than when I first got in.

What’s the hardest part of being mayor?
DeGeeter: As Mayor, you don’t really get a day off. You’re not just working the hours City Hall is open, there’s a lot going on during evenings and weekends. I’ll be at home mowing my grass and a car will pull up and the driver will say, “I hate to bother you on your day off, but…,” and I just laugh because the mayor doesn’t get a day off. Whether you’re at the grocery store, at church or out at the Parma Tavern trying to enjoy a fish fry with the family, someone’s likely to come up to you. But it goes with the territory. One thing I pride myself on as Mayor is to be very accessible. I try to do a lot of “twofers,” attending community events as Mayor but also being there with my kids and wife as a family activity. I try to balance being a good mayor with being a good husband and father, making sure I get to my son’s baseball games or daughter’s soccer. I’m constantly juggling that.

What’s the best part?
DeGeeter: The best part of being Mayor is that every day is different. One day I might be working with the Police Chief on an issue, and the next I’m working with the Recreation Director talking about a new splash pad. That’s what makes it exciting.

What’s your proudest moment as mayor?
DeGeeter:  Last year, we had a retired UAW autoworker [United Automobile Workers labor union] suggest at a City Council meeting that we should honor World War II vets as citizens of the month. We decided to go a step further and decided to find and honor all World War II vets still living in Parma. We were able to honor 37 vets at our Council meeting last September. We got them all certificates and it was just so great to see these vets (men and one woman!), very cool to recognize these members of “the greatest generation.”

Another proud moment also happened last September when we unveiled an I-beam from the World Trade Center at the Shoppes at Parma as a permanent 9/11 memorial. A lot of citizens came out on a beautiful Sunday afternoon, and it was really neat and a very touching, moving ceremony that I got to speak at.

What makes you so passionate about Parma?
DeGeeter:  First, Parma’s residents make it great. They’re passionate about their city. There’s also a lot happening here and we’re growing and changing. We’re attracting younger families, we have a new young professionals group, but we have a lot of history too.

People are starting to take notice. We were recently named an “overlooked dream city,” That’s someone else saying that, not us. One of my greatest responsibilities is to be Parma’s biggest cheerleader, promoting the city such as in front of the Cleveland/Akron Board of Realtors. Our housing values are going up. Houses are on the market for shorter periods and prices are getting up there.

People forget we’re the state’s seventh largest city. We’re bigger than Canton and Youngstown, but we get overshadowed by Cleveland. But that’s part of what makes it great too. It’s about an $11.00 Uber ride from my house to downtown. There’s a nice energy in Parma and it’s an exciting time.

What do you like to do for fun?
DeGeeter:  I like to golf and my favorite sport to watch is baseball. My son plays and I love to watch him, a two-hour game is like a two-week vacation for me. Same with watching my daughter dance or play soccer. I also like to grill on my back deck on a sunny day and have a cocktail while I listen to the Grateful Dead or Dave Matthews. And I like to read a lot—that’s my escape.